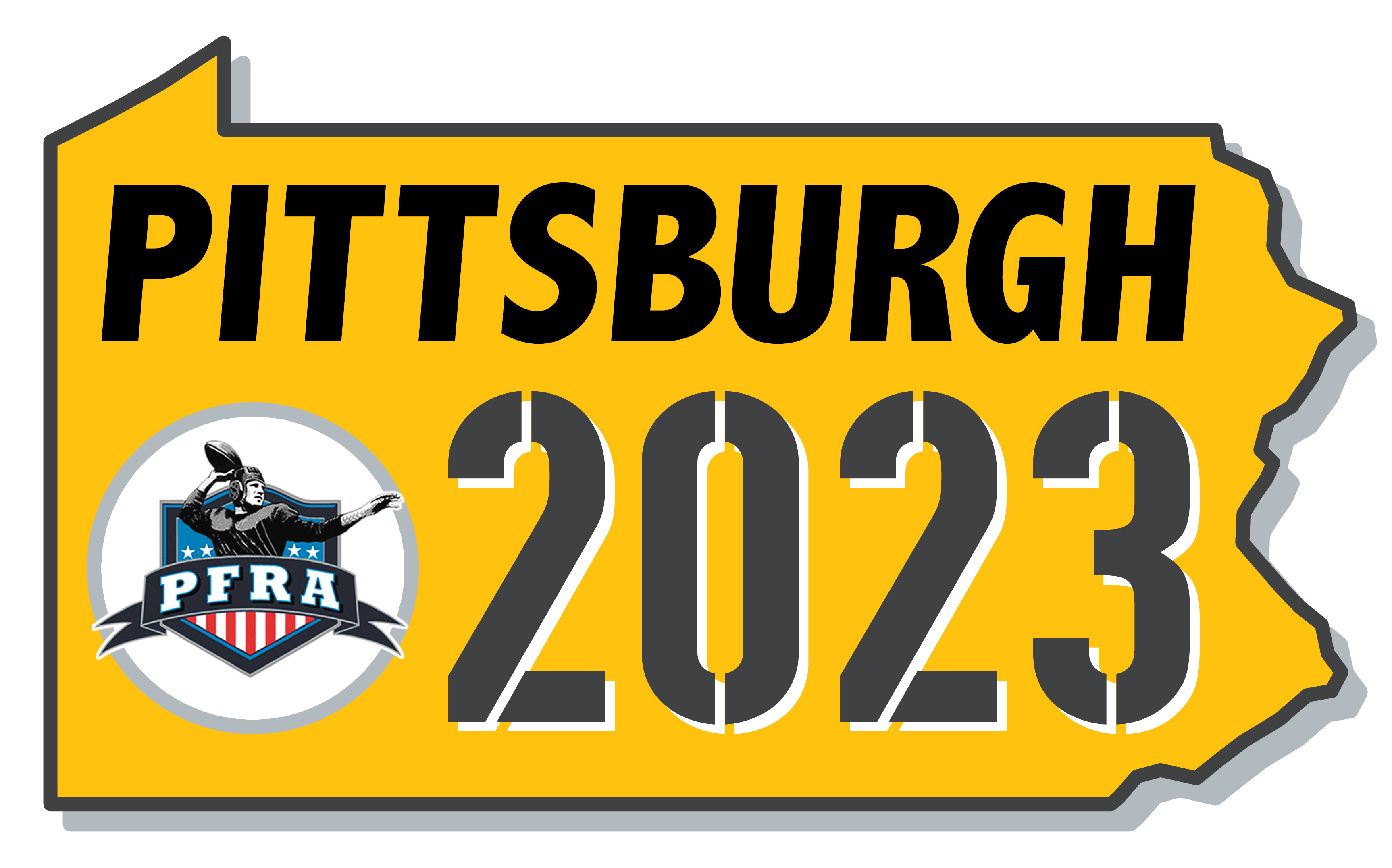 Watch this space for additional details about the convention.


The 2023 PFRA Convention will be held in Pittsburgh, PA at the Drury Plaza Hotel located at 745 Grant Street in Downtown Pittsburgh during the weekend of July 27-30, 2023. The Drury Plaza Hotel is a historical renovation of the Federal Reserve Bank building. As we have done in the past, the Convention sessions will take place during the evening of Friday July 28 and all day Saturday July 29 with add-on activities on Thursday July 27, Friday July 28, and Sunday July 30. The theme of the 2023 Convention will be A Celebration of Western Pennsylvania’s Pro Football Legacy. The fee for the Convention will be $75 for members and member spouses and $100 for non-members. The fee includes admission to the Convention, a Friday evening meal, and Saturday luncheon. To register for the Convention use the PayPal link above. Convention logo T-shirts will be available for purchase at a later date.

Overnight valet parking is available at a charge of $35.00 per parking spot per day.

Hotel amenities include the following:

Complimentary Evening Drinks and Snacks** - Join us from 5:30 p.m. – 7:00 p.m. every evening to enjoy complimentary hot food and cold beverages at our 5:30 Kickback®. The Hotel features a rotating menu of hot food, beer, wine, mixed drinks and soft drinks.

Complimentary Wi-Fi Throughout the Hotel - Get the score, check social networks or email family members in the hotel.

On-Site Facilities - Take advantage of the business center, fitness center or pool while away from home. Print boarding passes, finish a presentation or check e-mail in the Hotel’s business centers.

Individual reservations must be cancelled prior to 12:00 p.m. on the day before the reservation's confirmed date of arrival in order to avoid a non-refundable fee equal to one night’s room rate plus tax. Hotel requires a valid payment card and photo ID to be presented at check in. Check In Time: 3:00 p.m. Check Out Time: 11:00 a.m. Arrangements may be made for baggage storage with the Hotel’s front desk staff. June 25, 2023 is the cut-off date for the special group discount rate. Reservations made after that date will be subject to prevailing rates and availability.

The Convention itinerary will include our usual mix of speakers and tours.

The following speakers have already agreed to make presentations at the Convention. Additional speakers will be added.

Chris Willis has worked at NFL Films as Head of the Research Library since 1996. Books written by Chris include >Old Leather: An Oral History of Early Pro Football in Ohio, 1920-1935 (2005 Nelson Ross Award by the Professional Football Researchers Association for recent Achievement in Football Research and Historiography), The Columbus Panhandles: A Complete History of Pro Football's Toughest Team, 1900-1922, The Man Who Built the National Football League: Joe F. Carr, Dutch Clark: The Life of an NFL Legend and the Birth of the Detroit Lions, A Nearly Perfect Season: The Inside Story of the 1984 San Francisco 49ers, Walter Lingo, Jim Thorpe and the Oorang Indians: How a Dog Kennel Owner Created the NFL's Most Famous Traveling Team, Red Grange: The Life and Legacy of the NFL’s First Superstar and Bronko: The Legendary Story of the NFL’s First Two-Way Fullback. Chris was also the 2012 recipient of the PFRA's Ralph E. Hay Award, presented for Lifetime Achievement in Professional Football Research and Historiography. Chris will make a presentation about the Galloping Ghost and his barnstorming tour game in Pittsburgh on December 10, 1925.

Joshua Milton Anderson is a chess teacher, tournament director, and the president of the Chess Journalists of America. He has written articles for both Chess Life and the Professional Football Researchers Association’s (PFRA’s) The Coffin Corner and contributed to the PFRA’s Great Teams in Pro Football History Book Series. Joshua will make a presentation about the early history of the Eagles- Steelers Rivalry culminating with their 1947 playoff game.

Ryan Christiansen is a professor of English at North Dakota State University and a published technical writer, creative writer, and award-winning journalist. He has contributed to the PFRA’s Great Teams in Pro Football History Book Series and The Coffin Corner. Ryan is the author of Border Boys: How Americans From Border Colleges Helped Western Canada to Win a Football Championship and the recipient of the 2019 Bob Carroll Memorial Writing Award honoring that year’s best original article published in The Coffin Corner. Ryan will make a presentation about the Minneapolis Marines/Red Jackets.

Rudy Dicks is a freelance writer from Pittsburgh, and is the author of The '63 Steelers. He worked in newspapers for nearly 30 years as a reporter, copy editor, sports editor, and managing editor for daily papers in Ohio, New Jersey, and New York. As a sportswriter, he has covered boxing, basketball, major league baseball, college and pro football, and track and field.

Richard Peterson is the author of Growing Up with Clemente and Pops: The Willie Stargell Story. He is professor emeritus of English at Southern Illinois University. He is the co-author with Stephen Peterson of The Turnpike Rivalry: The Pittsburgh Steelers and The Cleveland Browns and The Slide: Leyland, Bonds and the Star-Crossed Pittsburgh Pirates. His essays on the Steelers have appeared in the Pittsburgh Post-Gazette and the Pittsburgh Quarterly.

Three add on activities have been added to the schedule, one for early arrivals on Thursday afternoon, one on Friday afternoon and one on Sunday morning.

The Thursday July 27 add on activity for early arrivals is a tour of the Heinz History Center in Pittsburgh from 1:00-5:00. Included in the tour is the Western Pennsylvania Sports Museum and behind the scenes tours of the Center’s collections management area, storage area, archives and library. The fee for the tour is $18 plus parking. Deadline for reservations for the Thursday add on is July 20, 2023. To register for the Thursday add on use the PayPal link above.

The Friday July 28 afternoon add on activity is a tour of the Latrobe (PA) Area Historical Society from 1:00-3:00 including the presentation "Latrobe: Home of Professional Football...Or Are We?" by Society President Mary Lou Townsend. Latrobe is approximately an hour from Pittsburgh. The presentation is Mary Lou’s attempt to separate fact from myth about Latrobe's role in the beginnings of professional football in the 1890s.

Mary Lou was born and raised in the Latrobe area. She has a life-long love of learning; so after teaching English for thirty-seven years in the Greater Latrobe School District, she became a volunteer at the Latrobe Area Historical Society. She has been its president since 2011. For the last fifteen years she has also been the editor of the Latrobe Historical Gazette, the society's quarterly publication. The presentation about professional football is one of many that she has presented on various aspects of Latrobe history.

There is no charge for the Latrobe tour and presentation, but donations are welcomed. Deadline for reservations for the Friday add on is July 21, 2023. To make reservations or if you have any questions, contact George Bozeka at sundaygolfer48@aol.com, 330-571-0112, or 330-867-1950.

The Sunday July 30 morning add on is a Tour of Acrisure Stadium (formerly Heinz Field) including the Steelers Museum from 10:00-12:30. Fee for the tour is $10 plus parking. Parking is normally free around the Stadium on Sundays, but there may be a charge if the Pirates have a home game or there is another event in the area. The deadline for reservations for the Sunday add on is July 23, 2023. To register for the Sunday add on use the PayPal link above.

Please stay tuned to The Coffin Corner, PFRA Website, and PFRA Forum for additional details and announcements. If you have any questions regarding the 2023 Convention, Convention add ons, or hotel reservations please contact 2023 Convention Organizer George Bozeka by email at sundaygolfer48@aol.com, or by phone at 330-867-1950 or 330-571-0112. 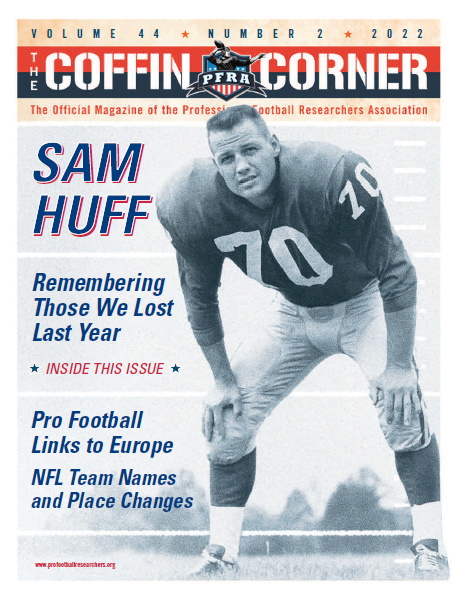